Sweco plans and designs the communities and cities of the future. The results of our work are sustainable buildings, efficient infrastructure and access to clean water. With 15,000 employees in Northern Europe, we offer our customers the right expertise for every project. We carry out projects in 70 countries annually throughout the world. Sweco is Europe’s leading architecture and engineering consultancy, with sales of approximately SEK 16.9 billion (EUR 1.8 billion). The company is listed on NASDAQ OMX Stockholm AB.

On Wednesday the 12th of December a group of enthusiastic Hydraulic Engineering students visited MTBS at their office located at the old port in Rotterdam. MTBS, Maritime & Transport Business Solutions, prepared an interesting real life port development case for us and after a short introduction about MTBS we spend the afternoon looking at the various subjects of this case. The afternoon ended with short presentations and a nice tour of the office. And of course some casual drinks, where the students were able to ask their remaining questions. We would like to thank Dirk and Ernst from MTBS for the fun and exciting afternoon! 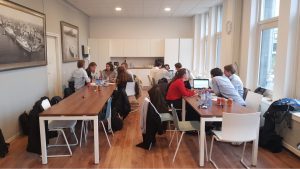 In this edition of the Swell you will find an overview of the past events, including a great article about the Summer Trip to China and a very first edition of Tjerk Constructions. Don’t forget to try and solve the Hydraulic Puzzle and find out about this years Waterbouwdispuut board members.

It’s always exciting to start something new, just as starting as a freshman at the university with a new study: the master hydraulic engineering. To meet your fellow student the master kick off was organised. The day started with some useful information for your study, followed by four different excursions. The day ended with a nice barbeque behind the civil engineering building. Now everybody was ready to start with the masters!

Here we took a close look at the Delta Flume, equipped with the largest wave generator in the world. The 300-metre-long concrete flume hosts waves of up to 4.5 metres high.  Currently, the new level-blocks are tested there.

With a part of the group we visited the Rotterdamsebaan at the Laan van Hoornwijck. After an interesting and quite technical presentation we got a guided tour around the site. We got to explore the inside of the first tunnel, which had just finished building, and we saw how the drilling machine was being installed for the start of the second tunnel.

With most of the international students of Hydraulic Engineering, we went to visit the Maeslantkering; one of the showpieces of the Deltaplan. The excursion was introduced by an lecture of Mark Voorendt, afterwhich we went to the Maeslantkering. After the walk-around, we build our own flooddefefences as real hydraulic engineers.

At HKV we got an presentation about the BRIGAID project which supports innovations that reduce the impact of floods, drought and extreme weather. To actually witness one of these innovations we went to Flood Proof Holland where a prototype of a titling road flood defence was demonstrated.

On Wednesday 14 of November, the managing director of BAM International, Wouter Remmelts, came to TU Delft to give a lunch lecture to hydraulic engineering students. It was a very interesting lunch lecture and we would like to thank Wouter Remmelts and Julian Odio Pozuelo, a recent graduate from the TU Delft, for their enthusiastic presentations.

Witteveen & Bos will organize the second annual business course on November 29th in Amsterdam. The topic will be the enhancement of the Afsluitdijk. It promises to be a very fun day where you can learn a lot, as well as get closer to one of the most respected engineering companies of the Netherlands! The course will be in Dutch so only apply if you speak Dutch.

On the 5th of October, MTBS visited our faculty to give an interesting lunch lecture on value engineering within the limits of port development. The lecture was given by Ivo Tukker, a consultant at MTBS, who also provided better insights into working at MTBS.  Ivo was accompanied by Stephanie and Wijnand, two hydraulic students who are currently doing their thesis at MTBS, who provided some more input from the perspective of a student. We would like to thank Ivo and MTBS for the lecture and hope that everyone enjoyed their time!

On the 22nd of October the first Master Community of the year was organised in PSOR. The afternoon was hosted by Tjerk Zitman and was regarding the specialisation choice students have to make in their first year. Since hydraulic engineering covers a wide spectrum of subjects, it is important to inform students as early as possible on their options.There were several presentations from PHD candidates from our department by Frederik Vinke, Wouter Jan Klerk, Stuart Pearson, Victor Chavarrias and Frans van Grunsven. After these fun and insightful presentations we had some drinks together and the remaining questions were asked.

All in all, the afternoon was a success and we hope that it will help the new Master students in making a thoughtful choice of their specialisation. For questions about your specialisation choice you can contact us or someone at the department.

During the Multiple Day Excursion 2018, 23 students went to Dublin! Our first host was the OPW, Office of Public Works who were working on flood defences along the River Dodder, a river straight through the city of Dublin. Pictures of high-water levels were shown and the difficulties during the construction of the flood defences were told. In the morning sun we walked along the river to see the flood defences. In the afternoon we went to Turlough Hill, a hydropower station a bit outside of Dublin. It consists of two lakes for which during high energy demand it works as a turbine, during low energy demand as a pump. It was cool! Afterwards we took a short walk in the beautiful nature of Glendalough. On Saturday we went to ARUP, who had an interesting case about how we as engineer can contribute to the 17 Sustainable Development Goals set by the United Nations; very inspiring. We finished the weekend with a nice dinner with the group!

A big thanks to the organizing committee Loes, Roline, Mike & Quinten, and of course not to forget Marion & Matthieu, two professors who joined the trip and presented us with insightful and fun comments along the way!

Hope to see you next year!

On the 22nd of November the first Hydraulic Dinner of the year took place in Cafe Rotterdam. At this evening 24 Hydraulic Engineering students had the opportunity to have dinner with Van Oord, Royal Haskoning, Boskalis and Witteveen + Bos. We started the evening with some casual drinks after which we were seated at the tables. Each company had their own table with students. After each course the group of students switched to another company. After four courses and four presentations of all the participating companies we concluded the evening with some drinks to talk about the successful evening full of opportunities for all the students and companies. It was a great evening at Cafe Rotterdam!