In this Swell: Multidisciplinary project in Chile, introduction of the new board of ‘ Het Waterbouwdispuut’  2017-2018, travelogue of the Study Tour to India and Sri Lanka, the last ‘Tjerke Verhalen’ and not one, but two Hydraulic Puzzles!

Being the Hydraulic Engineering student association, we are considered to create and maintain the link between students, professors, hydraulic companies and ourselves. We do so by keeping everyone updated by sending newsletters and magazines, organizing field trips, case studies, guest lectures and other activities like Master Communities. Also, we will be the central contacting point for students and others to ask questions, to gather information about activities or to get a nice hydraulic chat.

For this purpose, we organize a weekly coffee break for all Hydraulic Engineering students and the whole Hydraulic Engineering department. It is a very casual and regular event. We’ll make sure there is enough coffee and tea for everyone, and knowing there will be delicious cookies as well, you know you should be there!

The schedule for the Hydraulic Coffee is presented below and will always start at 10.30 AM in front of our office, room 3.72. Every last Coffee of the month will be hosted at the Waterlab. Check also our Facebook or ask someone of the board. It might be your chance to register yourself for upcoming activities or ask that question you wanted to ask your professors! 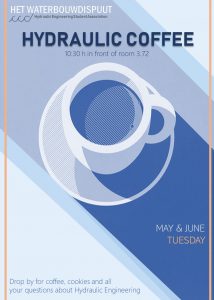 December 2018: Tuesday
(Exception: No coffee on Tuesday the 4th, but a very special coffee on Wednesday the 5th with a ‘Sinterklaas’ Edition)

As one of the world’s most prominent players in the field of hydraulic engineering, the People’s Republic of China keeps surprising us with astonishing projects like dams, ports and coastal infrastructure on scales that some might consider to be inhumane. The present situation in China moreover seems to attract plenty of attention, not only from an engineering point of view, but also with regard to political and economic questions. We could say that visiting this country and experience their working culture is more attractive than ever before.

These summer holidays ended with a bang for eighteen hydraulic engineering students, accompanied by dr. Mark Voorendt and prof.dr.ir. Zheng Bing Wang. It all started with an exhausting flight from Amsterdam via Moscow towards the first destination of the study tour, the city of Shanghai. Although you will not experience the “real” China here (not a single more western place to find in China), it is a metropole to never forget. With almost 25 million people living here, it is world’s most populated municipality at present. In the city life, this is reflected by highrises stretching out as far as you can see. To witness this, a ‘Shanghai-light’ tour was organized on the first day, watching the impressive skyline from The Bund and climbing one of the highest skyscrapers in the Pudong financial district to have an overview of how big Shanghai actually is.

To escape the immense tourist crowds in the city center, we had planned an excursion to the Yangtze estuary on the next day. After an early morning bus ride, we crossed the estuary by ferry, meanwhile witnessing the majesty of this river mouth and all gigantic vessels and cranes that came along with it. We were dropped off at Chongming island, an ecological island with a vast amount of salt marshes and nature reserves. Unfortunately, due to high typhoon activity in the days before we arrived, the park entrances were blocked, leading to an early end of this day. Luckily we still received some explanation about the Yangtze estuary the next day at the research facilities of SKLEC. Also, we paid a visit to the Dutch consulate on the same day, to be informed about the differences in working culture between the Netherlands and China.

Next on the list was the city of Wuhan. A thousand kilometers more inland we expected a little more quietness, however the opposite turned out to be true. With ten million inhabitants and situated on the crossing of the Yangtze and the Han river, Wuhan is the most populated city in central China. The reason of our visit was to pay a visit to the world’s largest dam and largest power station in terms of installed capacity (22.500 MW), the Three Gorges Dam. The university of Wuhan had arranged a special tour for us, in which we had the opportunity to actually go on top of this enormous concrete structure. An unforgettable experience. It took hours for us to see the most interesting spots, such as the shipping locks and the spillways. A long day, but definitely one of the highlights of the study tour.

At the end of the first week, we visited Nanjing, again located along the Yangtze river. We paid a visit to Hohai University, having strong connections with the TU Delft. This made it possible for us to really get to know the campus and the students. We even got invited for dinner, so that we could learn some Chinese traditions. We all expressed our gratitude to the host by approaching him personally with a glass of rice wine, lowering our glass a little lower than his to show our respect. The Chinese students gladly joined, resulting in a lot of fun and good conversations.

On Sunday, we took a look at the extensive research facilities of the Nanjing Hydraulic Research Institute (NHRI), which were so large that we had to be transported with big golf carts to see all the experiment labs. The next day, another hydraulic highlight was planned. Today we were going to see one of the largest tidal bores in the world! We were being warmed up with some model simulations, after which we headed to the bore location. For an hour or so, we chased the tidal bore by watching it and then hurrying into the car with a loud “kuài kuài!” (fast, fast!) to arrive at a new spot, yelling even louder since it grew bigger and bigger. At the end of the bore hunt, we even saw a reflected tidal bore, which grew so big that it rose above the quay wall, resulting in many wet shoes.

After this, we planned some days to see some of China’s nature and culture. We climbed Mt. Huangshan, better known as the Yellow Mountain, argued to be the most beautiful mountain in China. In addition, we got an impression of the city of Hangzhou, famous due to the city’s natural beauty and location along the fabled West Lake.

Our very last day was dedicated to the Yangshan deep water port, the busiest container port in the world, which is connected to the mainland via the 32,5 km long Donghai bridge. This excursion was organized by the Shanghai Dredging Company. After our visit, we were invited into the office of SDC, where we had a big meeting with some of their directors, including the president. At the end of the day we even got the opportunity to enter the terrace on the top of their office, located at the middle of The Bund!

With this, our study tour came to an end. A lovely two weeks full of activities which were really enjoyable. We got to know a little bit more of China, although there is still so much more to discover. A big thanks to the ‘Three Gorgeous’, clearly visible as the flag-bearers in all group pictures, for the photographic control during the trip. If you are looking forward to have an experience such as this one, please do not hesitate to sign up for next year’s version!